Moya Trombones takes its name from the zulu word « uMoja » which means « soul, spirit, breath, wind », i.e. all the basic elements of our music and our group.

MOYA Trombones is part of the Vincent Bach family and continues its role of ambassador for the René Hagmann valves dedicated to trombones and developed by Servette-Music in Geneva.

A graduate of several conservatories in Switzerland, Germany and Italy, Francesco won second prize at the Aosta International Trombone Competition in 2008 and was awarded the István Kertész Scholarship in 2015. Francesco D’Urso teaches…

…trombone at the Geneva Conservatory of Music for the «MusicEnsemble» project (coordinated by Maestro Domingo Hindoyan and sponsored in particular by Maestro Gustavo Dudamel) and at the Multisite School of Music (Canton of Vaud, Switzerland). Since 2008, he has been collaborating with the Orchestre Sinfonietta de Lausanne and from 2011 has regularly played as first and second trombone with the Orchestre de Chambre de Lausanne. He currently holds the role of principal trombone with the Geneva Chamber Orchestra under the artistic direction of Maestro Arie van Beek. In 2015, he produced – in collaboration with Difem Music Publisher – his first album entitled «Stella», dedicated to his daughter. He is also a member of the ensemble Moya Trombones.

He started the trombone at the Annecy Conservatory in Haute- Savoie, where he received a DEM in the class of Jean-Michel Frécaut in 2002. He continued his studies first at the Rueil-Malmaison Conservatory (France) with Alain Manfrin (First Prize 2003); at the HEM of Lausanne…

…with Michel Becquet (Concert Diploma 2007) and then at the Aosta Conservatory with Vincent Lepape. He also participated in masterclasses with Christian Lindberg, Jorgen van Rijen, Toby Oft, Nitzan Arrows, Joël Vaisse… In 2008, he won the First Prize in the International Trombone Competition of Aosta. From 2008 to 2016 he regularly played with the Lausanne Chamber Orchestra as first or second trombone. He also works with the Rai Orchestra in Turin, the Turin Opera, and the National Orchestra of Lorraine under the direction of prestigious conductors such as Valery Gergiev, Gianandrea Noseda, Heinz Holliger, Neeme Jarvi, Jukka-pekka Saraste, Christian Zacharias, Michel Corboz, Pinchas Steinberg, Bruno Campanella. He has played at the Enescu Festival in Bucharest and the Festival de la Roque d’Antheron. Since December 2015, he is the solo trombone at the National Orchestra of the Pays de la Loire and a member of the Moya Trombones ensemble.

Born in Pola de Siero (Spain) in 1984, Rubén Gonzalez del Camino began his musical studies at the age of 9, learning the trombone in his hometown’s music school. At the age of 14, he joined the Oviedo Conservatory (Spain), where he obtained his first bass trombone degree aged 20.

In 2005, he joined the Lyon National Conservatory of Music, studying under Frédéric Potier. He obtained his Master of bass trombone in 2010. Between 2010 and 2012 he studied the bass trombone in the same conservatory, under Daniel Lassalle. He has collaborated with major French and Europeanorchestras: l’Opéra de Paris, l’Opéra de Lyon, l’Orchestre National de Bordeaux, l’Orchestre de la Suisse Romande, l’Orchestre Philharmonique de Radio France, l’Orchestre National du Capitole de Toulouse, l’Opéra de Marseille, l’Orchestre Philarmonique de Strasbourg. He has also worked with prestigious music ensembles such as Les Sacqueboutiers de Toulouse, Le Concert d’Astrée, Jordi Savall. Since December 2011, he has held the post of bass trombonist in the National Orchestra of Montpellier. In addition to the orchestra, he is also a member of the brass sextet Made in Brass and the Moya Trombones ensemble.

Michel Rossy is a director, comedian and professor of acting. He graduated from the Geneva Ecole Supérieure d’Art Dramatique in 1977. Since 1974, he regularly performs in all the theaters of Suisse Romande. He also directed more than thirty shows in this region. He taught drama, at the Geneva Conservatory between 1996 and 2000. Since 2001, he has been teaching at a high school in Geneva.

Thanks to its four members, clownish virtuosos, the trombone is the show’s guest star. It is not the first time for Francesco D’Urso, Jean- Sébastien Scotton, Maxime Chevrot or Rubén Gonzalez del Camino to be together on stage. Since 2007, they have regularly been touring with their previous shows in Switzerland, Europe and as far as South Africa in 2010.

On stage, four trombone players in dinner jackets are ready to give a concert of classical music. Right when they want to start, their attention seems to be caught by other « musical variations ».

What ensues is a series of hilarious scenes bringing music and comedy together for the public’s entertainment.

A classical concert is about to start when the well-known melodies take over the musicians : fox-trot, symphonies, operas and other classical music hits. As in any group situation, dissent emerges and leads to situation comedy. Soon enough however, the members of the group reconcile.

The musicians mischievously play childish games during which they revisit a wide repertoire remastered for the trombone quatuor, from baroque music to that of Queen or Ram Jam, including romantic music and jazz.

They are at once singers, dancers, and comedians, the four trombonists play along the the amusement of the audience. 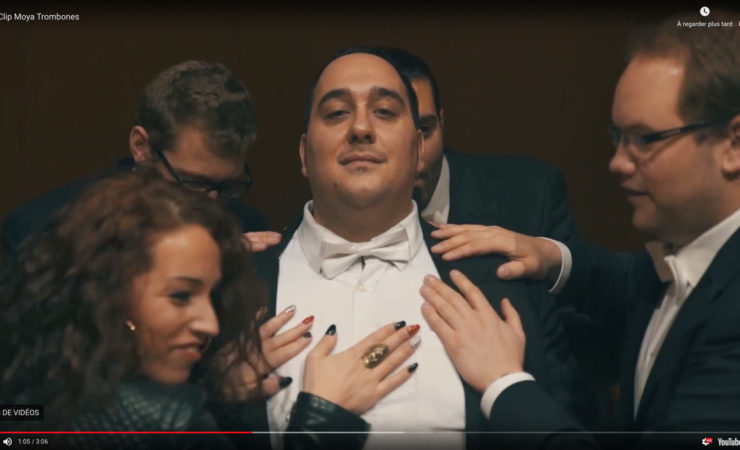 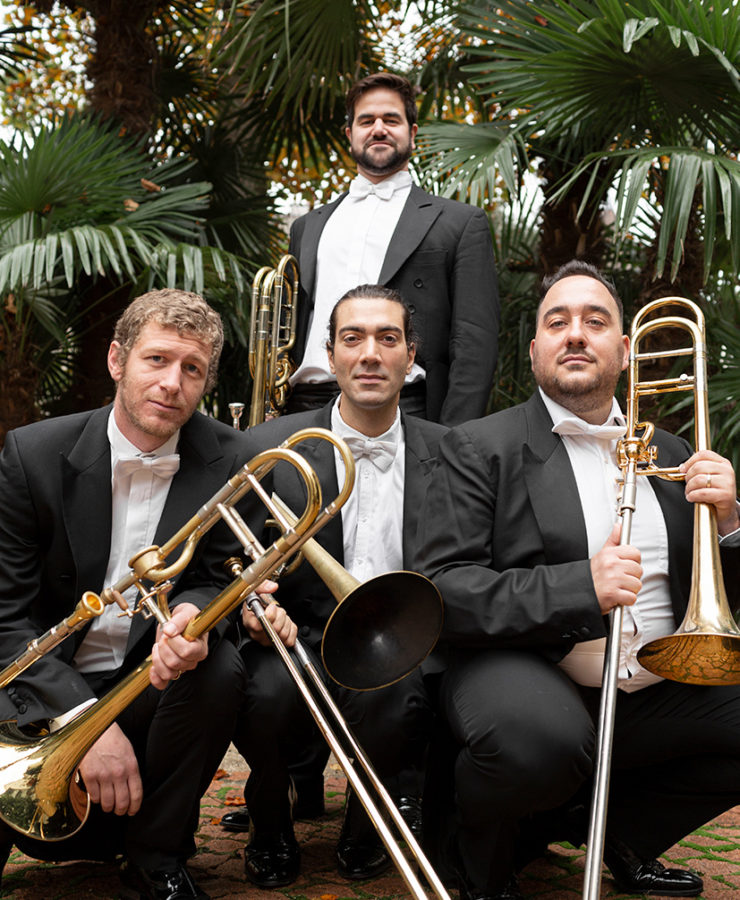 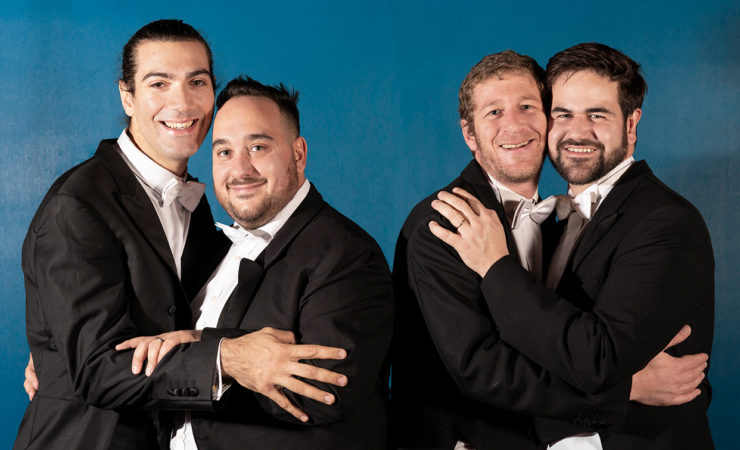 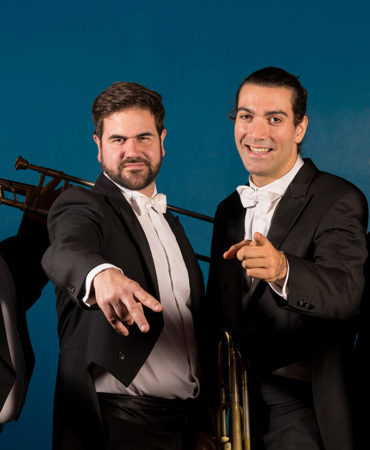 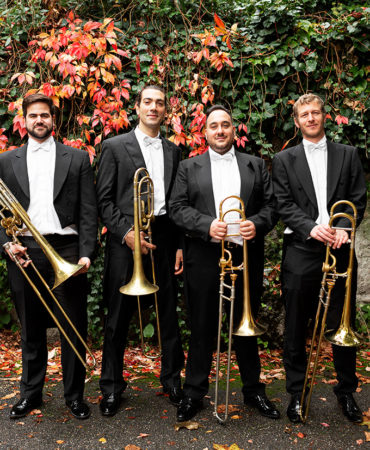 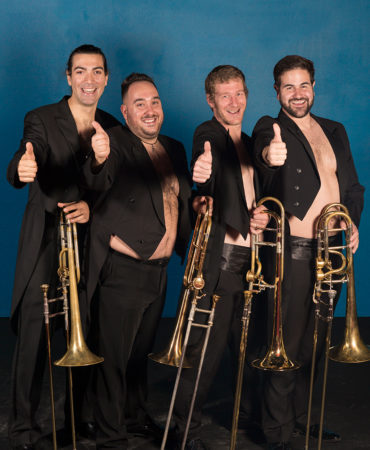 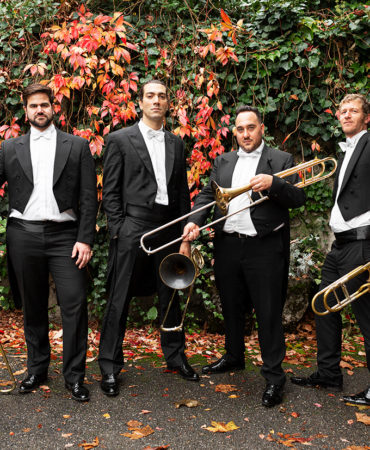 For all informations,
please contact us via contact form,
we will answer you as soon as possible.